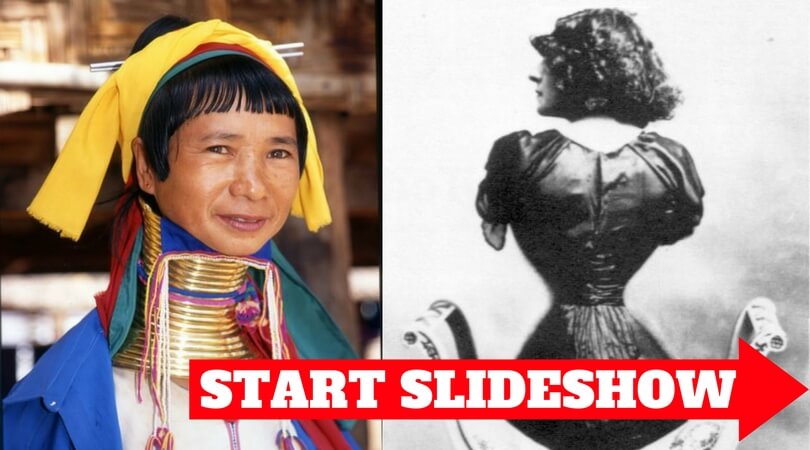 People say beauty is pain and anyone who wants to be beautiful must pay the cost.

Many modern fashion trends such as bikini waxing or plucking the eyebrows can be painful and uncomfortable, but if we look back to the practices of the past, this seem like child’s play in comparison.

Some of the fashion trends throughout history were shockingly dangerous, truly agonizing and many of them even proved to be fatal in numerous cases.

So take a deep breath just like you do when you are zipping up your jeans and see the list below for some of the deadliest fashion trends throughout history.

No woman in the world will tell you that she doesn’t want to have a slim waist. However, having a tiny waist is not a new fashion trend.

Considered by many to be one of the most dangerous fashion trends, the corset restricted women’s breathing which often led to fainting.

However, fainting wasn’t the worse thing that could happen to a woman trying to keep pace with fashion at the time.

Internal organs were also subject to damage as they were forced to shift from their natural position and this could eventually lead to internal bleeding.

While modern surgeons feel that rib removal is too extreme a procedure to be performed for cosmetic reasons, it seems that this was not the case with doctors in Victorian times.

The quest for a wasp waist in the Victorian era went one step further with some women having removed their floating ribs.

There is a debate as to whether rib removal actually existed in the Victorian era since surgery was mainly confined to amputations and the removal of external problems.

However, some sources state that there were cases of rib removal surgeries in the Victorian era, but these often proved to be fatal due to infections.