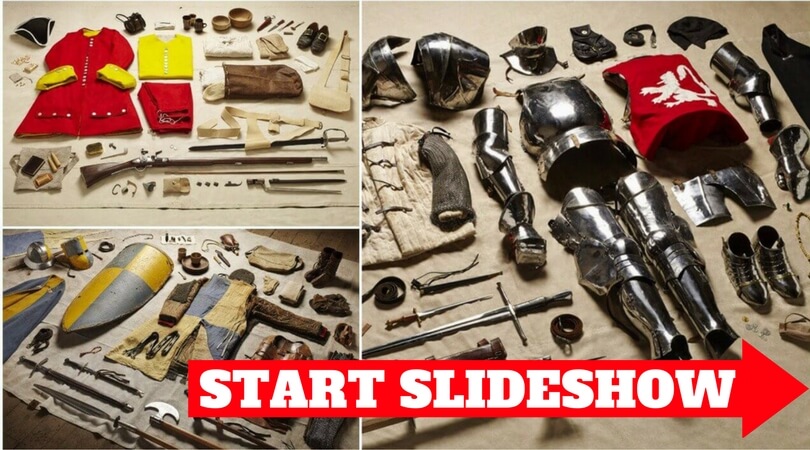 Every century has its battle, and battles from different eras have been fought with various weapons. It’s amazing to see how the soldiers’ inventory has evolved over the years.

For instance, the soldiers of the 13th century were heading to battle equipped with a Kettle helmet and battle ax, the troops in the 16th century were using swords and daggers, and throughout World War I hand grenades were a regular part of every British soldier’s kit.

Thom Atkinson, a UK-based photographer, documents the equipment of British soldiers over the course of 1,000 years. His series, entitled “Soldiers’ Inventories” captures the battle kits from The Battle of Hastings through the Battle of Agincourt in 1415 to the Falkland’s Conflict in 1982.

The neatly organized gear, besides weapons, also included things like cards and checkerboards, which provide a glimpse of how the soldiers killed the boredom and monotony during a war. To gather the gear, the photographer visited living history communities, whose members collect it for such things as war reenactments.

The 9-month-long project was an educational experience for Atkinson: “I’ve never been a soldier. It’s difficult to look in on a subject like this and completely understand it. I wanted it to be about people. Watching everything unfold, I begin to feel that we are the same creatures with the same fundamental needs.”.

The kit includes white cloth with a snip for cutting small items, a leather box of needles and a roll of thread fire steel a flint and tinder for starting a fire.